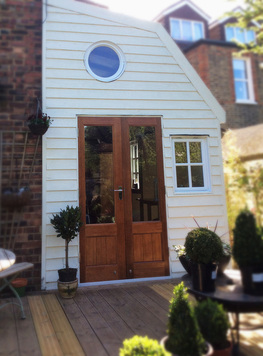 Half Barn Bespoke Garden Annex, custom made in Berkshire / Surrey
The owners of this property in Berkshire had a bit of a dilemma. The couple had 3 girls, 2 of which were sharing a room and were getting to the age where they needed their own space.
They looked at an extension / Annex but that was going to be far too expensive to be able to get the square footage that they needed. They also looked at a loft conversion but with they layout of the upper floor it would mean cutting 2 meters off one of the bedrooms and loosing the en-suit bathroom!

They then contacted us with the view to have a cabin in the garden that was quite small as it was. Our suggestion was to remove the old conservatory that was already leaking and build a new Garden Annex in its place.
the Annex had to have enough square footage to incorporate an double bed, a small sofa, a desk and a double wardrobe.
We played about with designs and ideas and came up with the "Half Barn" shaped Annex. The vaulted ceiling was just about high enough to suspend a double bed with a ladder to the lower floor.
The Annex was built with pressure treated timber, was fully insulated and had heat, light and power.
This Annex was a huge success with the family, the only problem was.... who's going to have the Annex as their bedroom?
A garden Annex can be any size or shape and does not have to be built on the side of the house. As an Annex, it can be used for an Office, a Studio, a Games Room or  just a spare room.
If you need more space and think that a Garden Annex could be a possibility, feel free to contact us for a site survey.